Recently Microsoft introduced “Modern Comments” into its 365 software suite (MS365, aka Office 365), slowly rolling them out to MS365 users over the past year. According to Microsoft, this revision to comments is designed to facilitate collaboration by allowing more extensive conversations in comment threads (e.g., using @mentions to tag another user).

Unfortunately, through testing the Inera team has discovered both that these Modern Comments have lost some useful features (e.g., less easy to navigate among them) and that an important feature of eXtyles has been removed: the ability to use character styles in comments. This FAQ describes the observed degraded behavior of Modern Comments in Word and current workarounds.

Both eXtyles PubMed and Crossref Linking and Correction modules use Word character styles in the comments returned from the validation processes.

For example, if eXtyles PubMed validation returns a potential match for a reference with differences too great to confidently update the reference text automatically, eXtyles adds a Word comment  containing the PubMed version of the reference, formatted in the correct editorial style and tagged with the correct eXtyles reference character styles (see table 1).

From there, an editor can simply copy and paste the PubMed version of the reference into the document’s reference list, preserving all the character styles (which are required for XML export) without having to perform any significant manual editing or styling.

Modern Comments are not able to include character styles (see table 1). Therefore, if your version of Word uses Modern Comments, you can still copy and paste corrected references returned from either PubMed or Crossref validation directly from the Word comment into the reference list, but you may now need to manually apply character styles.

If a document has been processed through eXtyles prior to the Modern Comments update and is then opened in MS365 with Modern Comments, you may see the warning message shown below the comment in figure 1. This “missing content” warning will also appear if the comment text previously included now-unsupported formatting, such as numbered or bulleted lists. 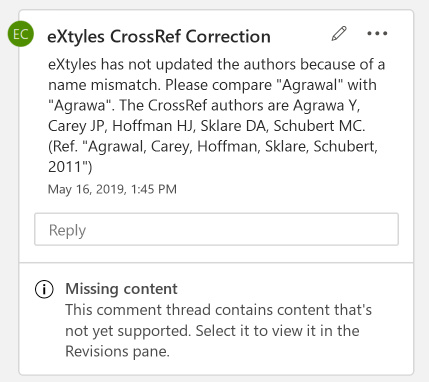 If you frequently take advantage of the character styles that eXtyles uses in Word comments during PubMed and Crossref validation, the Modern Comments update will create some inconvenience for you.

Fortunately, we have found some workarounds, and although they aren’t as graceful a solution as the previous Word comment behavior, they will enable you to copy and paste fully styled text returned by PubMed or Crossref validation from comments into the Word document.

Once you have successfully run either the PubMed or Crossref validation step, you can do the following:

1. Navigate to the Review tab on the Word ribbon.

2. Select Reviewing Pane (either vertical or horizontal, as shown in figure 2).

The comment text in the Reviewing Pane includes the eXtyles character styles returned from the validation process that you just ran.

3. Copy and paste the reference text from the Reviewing Pane into the Word document.

Alternatively, you can avoid the Reviewing Pane by doing the following:

1. Copy the unstyled reference text directly from the Modern Comment.

3. Strip the eXtyles tags from the reference.

4. Re-run eXtyles Reference Processing to get the character styling back.

Finally, you can temporarily turn off Modern Comments in Word by going to File > Options > General and deselecting Enable modern comments.

Note that this is described as a temporary solution because eventually Microsoft will remove the option to turn off Modern Comments.

Warning: Turning off Modern Comments will not “fix” existing comments!

Testing by the Inera team has found that as well as not supporting Word character styles, Modern Comments also have other functionality issues.

You may notice that after you run an eXtyles Advanced Process, any comments that eXtyles has added are collapsed in Print Layout View; that is, their content is not displayed in the margin, as shown in figure 3: 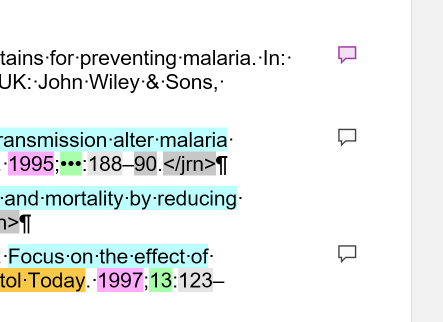 Figure 3. Comments are sometimes collapsed when eXtyles Advanced Processes are run, which hides their content.

You can “rehydrate” collapsed comments by going to the Word Review tab on the ribbon, and toggling between Show Comments > List and Show Comments > Contextual (see figure 4).

You can also make the comment text reappear by saving, closing, and reopening the Word document.

You can also use the Previous and Next navigation buttons on the eXtyles tab of the Word ribbon to jump from comment to comment in the document, which is a convenient way to review any comments that have been added after an eXtyles Advanced Process has finished running (see figure 5).

Figure 5. With pre-Modern Comments, you can navigate among comments using the Previous and Next buttons on either the Review tab or the eXtyles tab of the Word ribbon.

Figure 6. You can only navigate among Modern Comments using the Previous and Next buttons on the Review tab of the Word ribbon.